So far, we have always started this unit with a quick lab to determine the relationship between the stretch of a spring and the force the spring exerts. The result of the experiment giving us Hooke’s Law:

I’ve contemplated moving that lab to an earlier unit, likely Unit 4 after the gravity lab. So far, I have kept it at the start of this unit.

After the spring lab, we quickly proceed to the paradigm activity for this unit. You can read about that here.

The first step in deploying the model is this video that explains how to use energy diagrams. I haven’t had time to properly introduce the pie charts, but so we jump straight to energy diagrams.

We begin with worksheet 1, which has the students create the energy conservation equation from the energy diagrams for various events. For those familiar with energy diagrams, either from my previous post, Kelly O’Shea, or modeling materials, you’ll see that I’ve recently modified what my students are doing. In an effort to make them similar to momentum diagrams, I moved the identification of the system to the left side of the diagram. I then add a Force vs. position diagram between the two bar charts when the system is open, similar to the Force vs. time graph for momentum diagrams.

In worksheet two, we now add in doing calculations to the mix. The students now need to solve similar problems, but are now given numerical values.

After that, we usually are ready to celebrate Festivus!

We celebrate this holiday with the “Feats of Strength!” I begin by asking the students who is the most “awesome” at lifting a bag. Usually at least one student will ask me to clarify what I mean by most awesome. After discussion and prompting from me, we usually settle on an “awesome-ness” factor, designated A as some arrangement of:

At some point, the students notice that energy is in the numerator of this factor. At some point along the way. we rename this factor “power.” Before we get to that, I try to ask them what name we could give to this quantity. We usually start taking about “awesome” videos on youtube, such as Kobe Bryant jumping over a pool of snakes:

Usually, as Kobe is in the air, at least one student will say, “Whaaaattt!”

Usually followed by, “That can’t be real!” If a student doesn’t say it, I’ll lead them to it, but once they say, “Whaaatt!” they’re ready. I let them know that the unit of power is the watt.

I now reveal the two challenges for the Feats of Strength, the Bag Lift, and the Ascension of a Flight of Stairs. The students each must compete, but they don’t have to try too hard if they don’t want. In the end, they must calculate their power output in watts. I do this, so that the students get a physics sense of the SI unit of power. We usually wrap up the activity by asking how many of the students could have powered a 100 W light bulb or a 1200 W microwave oven.

From there, we progress to worksheet 3 which now includes calculations of power along with the energy diagrams. After that it’s time to review and take the test. After this unit test, we review for our midterm, take that midterm, and go off for Christmas Break.

I’d like to show how Energy Diagrams can be extended to help solve problems for thermodynamic processes. As an example, imagine the problem tells us that a 1 cubic meter sample of gas at a pressure of 101 kPa, is compressed isothermally at a temperature of 300 kelvin to half its original volume. 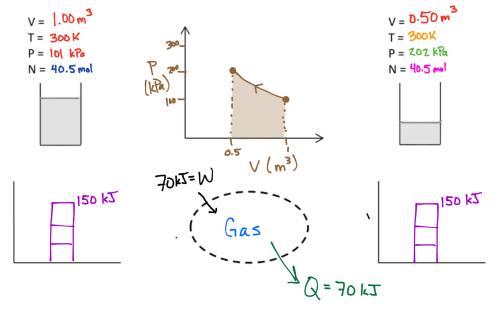 The first thing we can do is write the given information, which is done in red ink. Next we can try to figure out the rest of the variables for the initial and final states. From the Ideal Gas Equation

we can calculate the number of moles at the initial state (blue ink). If we assume it’s a sealed container, then the moles would be the same in the final state (pink number). We were told the process is isothermal, so the final temperature must be the same as the initial temp (orange ink). We can determine the pressure at the second state by again using the Ideal Gas Equation.

The next step is to draw the approximate size of each container below the state variables. Since the initial volume is twice that of the final, we make the container on the left about two times bigger than the one on the right (grey ink).

Next up is the energy present at each state. To find these values, we can use the other equation developed during the computer simulation/paradigm lab:

Since this only depends on the number of moles (a constant) and temperature (not constant) the relative size of the energy bars will be proportional only the temperatures  of the two states (purple ink).

The next step is drawing the

diagram (brown ink). This shouldn’t be anything new for people familiar with thermodynamics or from most textbooks. For the sake of brevity, I’m not going to explain that. After we make the

graph we can now determine the working that occurred between the system and the surrounding by finding the area under the curve (brown shading). To find the area, we can use calculus or the equation given in most textbooks for the work of an isothermal compression:

The last step is to complete the energy flow diagram (the “O” of the “LOL Diagram” at the bottom). By having the grey pistons drawn, we have a clear indication that the gas was compressed, which would mean that energy flowed into the system from an outside force moving the piston inwards (black ink). To determine the amount of heating, we can use the First Law of Thermodynamics equation:

We know the initial and final energy (purple ink), we know the work done (black ink), so we just have to calculate the heating by subtraction (dark green ink).